THE CUBE SEAL
The Cube Seal is numerical ecstasy in the shape of a box consisting of 729 cells (9 x 9 x 9)
Each but the first cell contains a number of digit root nine.
The first row of nine numbers looks like this…

The last number 8883 is the 16th Fibonacci function from the number nine. 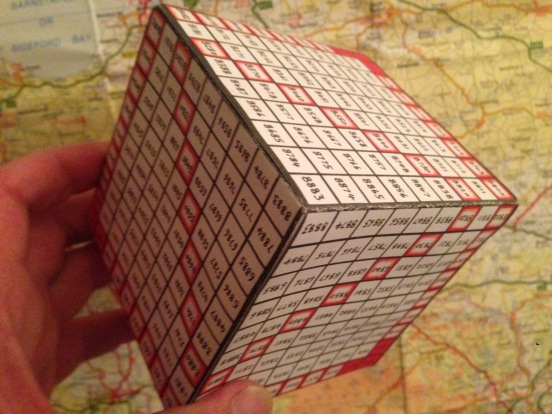 There is one cell in the very centre of the cube containing the number 4446. In terms of numerical creation on Earth 444 is again the cube or the Mother. 6 is the Father or Holy Spirit. The fusion of these numbers is the cosmic fertilisation.

The number 9 never appears in the Cube Seal, only the numbers 0 to 8. Number 8 is the number of infinity beyond which nothing can exist, however some things do exist beyond the stars… nothing or zero and the number nine, allowing creation to unfold beneath them.

The cube with this tetrahedron removed now totals 2,819,718.

THIS TOOK ME AGES AS EVERYTHING WAS DONE BY HAND WITH PENS, CARDBOARD AND GLUE.

The 36 cells in the tetrahedron when removed leave a remainder of 693.
When both these numbers are divided by nine we see the fraction 4 over 77.
The totals of tetrahedron and cube minus tetrahedron reveal the fraction 7 over 47. See how the 7 and 4 have jumped.

In the periodic table element 47 is silver.

47 suggests the silvery light of the moon.

The sun and moon appear to be of equal size during an eclipse. The mirror of the number 47 is 74.

Element 74 is Tungsten, with the highest melting point of all the elements.

The tilt of the Earth on its axis is 23.5 degrees bringing the total angle of tilt to 47 degrees, the angle between the tropics of Cancer and Capricorn.

Could our reality be a projection from the moon through the angle of 47 degrees, powered by the Cube Seal, the 47 year Mars cycle and Saturn. 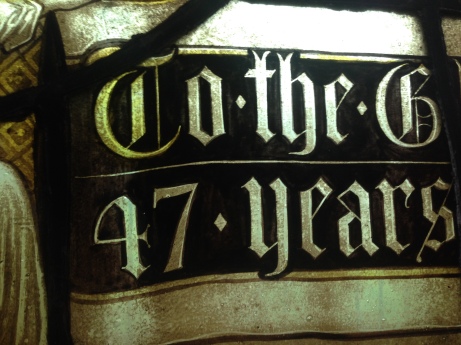 In the Freemason’s square and compass the angle the compass makes is… yes I’m afraid its 47 degrees.

I’m going a little deeper into the nature of numbers now.

In our numerically projected reality the moon appears as a mirror to the sun. Every number must stand beside a mirror. For instance the number twelve will form its mirror of twenty-one. The two numbers are married forever. The human body is also a mirror.

Back to the Cube Seal and its breakdown into the numbers 47 and 7.

37 mirrors with 73 creating the sacred geometry of hexagon and six pointed star. This is all shown in the Etheric Particle 216 by Salah Gherbi and for sale through this web site or pdf at http://www.universalzeropoint.com
The gematria value of the first line in the old testament comes to 2701, which is 37 x 73. In the beginning God created the heavens and the earth, with hexagons from a numerical mirroring machine.

Turning now to 23.5 we see its mirror of 5.32. These numbers add to 28.82. A number like this is self existing and forms a balanced node in the machine.
If we regard the number without decimal points and add the two together we find 767, again happily existing as a node.

I shall firstly try and explain the “Pythagorean comma” to those who are unfamiliar.

The tuning of a piano can be a good example.

Let’s say you have the job of tuning a piano and were not aware of the Pythagorean comma. If you begin with the note D you could then tune the note A to a perfect fifth of ratio 1 : 1.5. From the note A you could then tune the note E to a perfect fifth. If you were to continue around the circle of fifths you would expect to finally arrive back at your starting note after you have tuned the fifths twelve times.

However, you will arrive back at your original starting note but it will be considerably higher than anticipated. You will realise that you have made a pigs ear of tuning the piano. The difference in pitch between your starting note and ending note is known as the Pythagorean comma.

In order to arrive back at your original starting point you will need to make your fifths narrow which will cause a phasing between the root and fifth. In a nutshell this is what piano tuners and instrument manufacturers all do, resulting in our major thirds and sevenths sounding way too high and our minor thirds too low. Its just the way it is and we have pretty much got used to it. When the twelve note scale is divided equally we call it equal temperament.

So I asked myself this question…

Since our numerically projected reality appears to be the result of one number’s journey up or down to the next, ie the result of a zero becoming a one, AT WHAT NUMBER IN HERTZ MUST I BEGIN WITH IN ORDER TO MAKE THE PYTHAGOREAN COMMA EQUAL TO ONE HERTZ?

To determine the value of the Pythagorean comma from any note you take the value of that note in Hertz and multiply it by 1.5 twelve times and then divide by 2 seven times.

So there you go, the mirror or 47 reveals the mystery of the Pythagorean comma.

THE PYTHAGOREAN COMMA HAS A VALUE OF ONE BETWEEN 73 Hertz AND 74 Hertz.